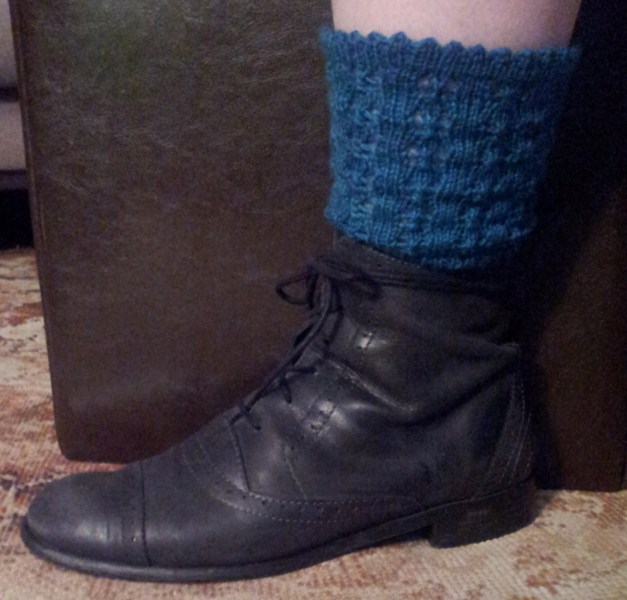 Wagons are meant to be fallen off, right?  Good.  While I haven’t started any of my big 3 for 2012, I have joined in a small KAL on Ravelry in the Tiny Owl Knits group.  The free pattern “Some Cloudy Day” is a pair of legwarmers, knit in smaller gauge and meant to be a little more fitted.

I really enjoyed making these, they were really good to do while I was dropping my son off to, and picking up from school. I modified these a little, I made them shorter, used a 1×1 rib and ended with a hemmed picot bind off. 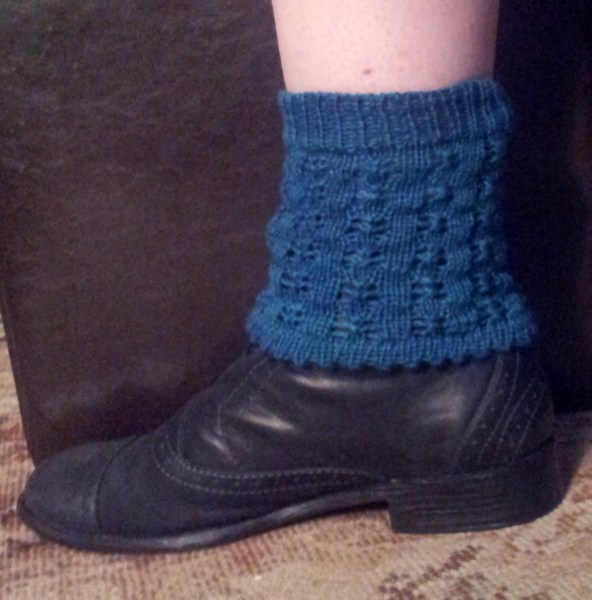 I just wanted something to stick into the tops of my boots or over my ankles if I was wearing other shoes.  As I’m not really a “sock knitter” I thought this was a great way to use some fun yarn and patterns without worrying too much about fit. 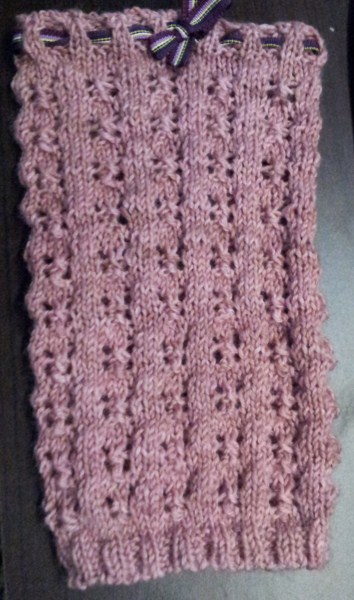 So whilst on a roll, I decided to quickly cast on another pair.  Using another sock yarn, I cast on with a few extra stitches and continued with the 2×2 ribbing.  At the top, I decided to add some eyelets to my ribbing so that I can put a ribbon through the top.  Cute, right?

The comments I’ve received while knitting these, however has been most amusing.  I usually get asked what I’m knitting, and when the response is “legwarmers”, I get a range of reactions.  Everything from a raised eyebrow accompanied by a slightly derisive “Oh.”, to being asked if I have a daughter.  Apparently one must be a girl of a pre-teen age to wear legwarmers.  Nevertheless, my ankles will not be freezing this winter. BWAHAHAHA…

Will I make more?  Probably, but I’ll try different stitch patterns though.

I had an epiphany.

I don’t finish projects because I get distracted by the new shiny, which causes me to become unhappy with my current projects. When I’m unhappy with current projects, I stop working on them… then after about a year they get frogged and the yarn either goes back into stash, or recycled into a new, new shiny.

While I know that I am a process crafter, and not necessarily a project crafter, it’s rather annoying at times, that for all this time that I spend on knitting, crochet or sewing, I rarely have any finished thing to show for it.

I see so many other knitters (and crocheters) who complete so many (in comparison) lovely things, and I get frustrated with myself that I’m not even completing one large item a year, when they are able to knit at least 3 cardigans/sweaters or something of equivalent magnitude. So the first thing, is to list what it is that I’m working on RIGHT now.

1. BeeKeepers Quilt – this is an ongoing over more than a year type ‘in between’ or ‘travel’ knitting. I have my box of 4ply yarn, and my owl bag of needles/stuffing to put into any handbag/tote that I might be carrying around.

2. Crochet Hooded scarf – Laceweight and large hook. Using a basic stitch pattern and modifying it to make a gorgeous hooded scarf. Scarf component is already 2/3 finished, after which it needs blocking so I can “pick up” and crochet on a hood. This is an “easy” pattern and requires very little attention. Good for a social project.

3. Lace Circular Shawl – I’ve only really JUST started this, and quite frankly I’m already a little scared by it. It’s rather advanced, and takes a lot of concentration. It’s definitely a “sit by yourself and not even have music playing” kind of knit. I haven’t advanced much with this, as something always distracts me.

I have other things around on needles, I’m sure of it, but I have no intention or desire to dig them out and get moving on them.

Shall I declare a crafting bankruptcy?

Anything that is not of the three projects above gets ripped out and yarn is either put back into the stash, or destashed? I think it’s a good idea. Then there is what I WANT to work on. I really want some good, useable pieces to add to my wardrobe. Not just clothing, but well thought out accessories. Hats, gloves, scarves and a shawl or four.

So I figured the next step was figuring out WHAT it was that I wanted to accomplish in my knitting for 2012.  Apart from plodding along with the projects that I have listed above I have decided that I want (at least) a cardigan, hat, gloves and shawl.  So I went through my favourites and really tried to find pieces that were in the ‘not too hard’ category, things that I could knit without having to check a chart every 2 seconds.  I also tried to find pieces that would work well together.  Less so with the shawl, as that is really a piece unto itself.

What I have ended up with is:-

1. Shawl – La Crumparsita
Whilst not strictly an “easy” knit, the pattern repeats are apparently easy to read in the knitting, so shouldn’t be impossible to knit while watching TV.  My friend Lisa gave me the pattern as a gift, and I’d really like to knit it up.

2. Hat – Morgan
I’ve long adored this shape of hat.  But with my HUGE head, it’s impossible to go and buy one, without either spending a lot of money at a milliners/hattery or making one myself.  I do actually own a vintage pattern to sew a hat similar to this from the 1940’s, so I may end up having a summer and a winter one.

3. Gloves –  SnapDragon Gloves
I think the idea behind these are just cute as!  Make snap on flowers and change them out to match an outfit or give your gloves a mini makeover.

4. Cardigan – Audrey in Unst
I’ve had friends that have made this cardigan and it is a stunning knit.  I also love that it’s seamless with a knit in “set in” sleeve.  It, of course, doesn’t hurt that it’s gorgeously vintage looking and will work well with gloves and a Morgan hat.

Four very workable, pretty and slightly vintage looking knits.  All I need to do now, is figure out some yarn. 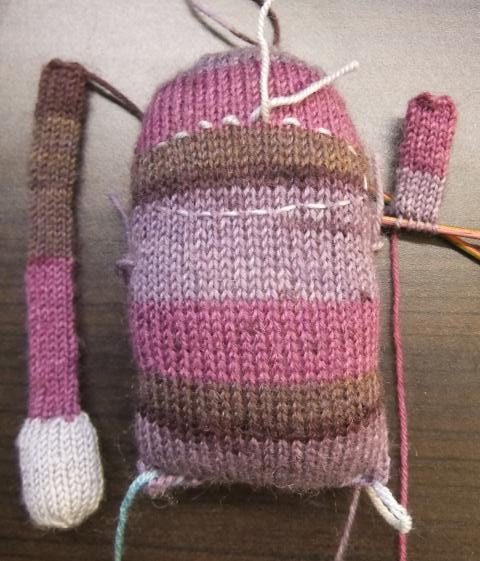 After the euphoria of my Harriet the Hippo, I couldn’t wait to cast on another little critter (especially as my son has absconded my Hippo).  Say hello to the start of Jerry the Musical Monkey.  I’m knitting him in a self striping sock wool, not because I want a stripey monkey, but because I want to make some character monkeys, and by using self striping yarn, I can then measure lengths for colour changes and not waste or run short of the colours I need.  Where the pattern is written for a 10ply and will make a body about the size of your face, this little guy is squishy hand size.  I am really enjoying Rebecca Dangers patterns, and think I may need to get my hands on her book.  They really are perfectly lovely, cute and quick gifts for kids (and some grown ups I know.. hehe).

And while my puff knitting has slowed down, I have been playing with some lovely yarns that have been donated by lovely Ravelry people, and that I’ve traded for.

Needlefood (left)- I’m so sad I found out about this yarn way too late.  It’s so lovely and I understand why there was such a rush on it.

Madelinetosh Merino Lite (right) – Such pretty colours and an interesting texture, being a single it does tend to track when knitted.  I really like it and would love to see it knitted into something larger.

Wollmeise Twin (left) – I was a little scared to use this yarn, as I didn’t want to fall in love with a yarn that I couldn’t afford to feed my addiction.  While the colour is lovely, I know other dyers who get just as rich a colour.  And I have to say I am not mad about the base.  It’s lovely yarn, just not the awesome I was expecting. 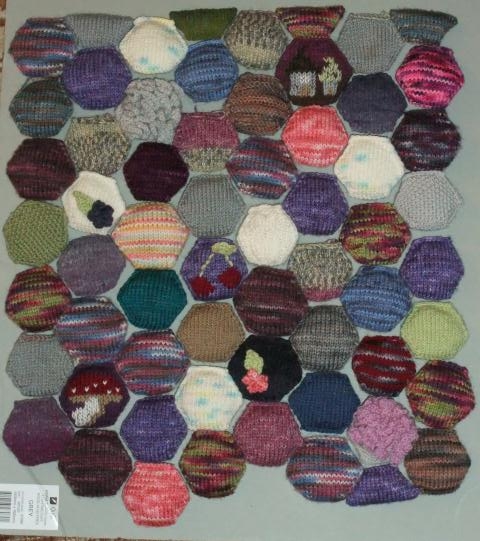 I am thrilled that I have bested my “one puff per day”, considering just how many I’ll need to make a quilt for the bed.  I am at 57 whole ones, and 5 half-edge puffs.  I definitely need more paler yarns, like the Jonquil and maybe some butter yellow/cream colours, otherwise it’s going to be a very dark quilt.