I’m in between bedside tables at the moment.  My old one is too big for the area I have, now that we’ve started rearranging the bedroom.  We haven’t bought new ones yet, because Husband & I can not agree on the style.  Husband still has his old one, because it fits on his side of the bed, but I’ve been using an old Ikea side table.

It is a “LACK” table, but a style that was only around for one catalogue.  More of a pot plant/fishbowl stand, than a table.  It’s only 30cm squared, and about 75cm tall.  It’s ok, but not a lot of room.  So I decided I would ask Husband to make a few shelves to install underneath, so I can have some spots to put my things of a night time.

Initially, it was going to be a basic cut and paint a few pieces of wood, seal them and that would be it.  But it turned into “LET’S PAINT THE WHOLE DAMN THING!”.  So the Boy helped me pick a colour (chose a teal type blue that highlights some of the colour in the tiffany style lamps we have), and we picked up some sandpaper.

I spent a fair chunk of the rest of the afternoon sanding and spraying the table, while Husband was cutting my shelves.  In hindsight, taking apart the pieces of the table may have been a better option, but, that would have meant actually considering taking my time with this project.  Really, I just wanted the table done ASAP.  The next day, I gave it a coat of some clear spray lacquer and then left it almost 48 hours.

Husband did a wonderful job of measuring, and installing the angle brackets to rest the shelves on.  I could barely wait to get it inside and put all my bits and pieces on it.  I put my lamp and tablet cradle on top, and installed my speaker bar on the side with a 3M strip. The first shelf is where I can put my phone to charge, along with my incidentals (like sleep mask) on it.  The second shelf will house things like my tablet cover (while the tablet is on the cradle), my bluetooth keyboard, and any book/ereader I might be reading at the time.  Lower shelf will keep my water bottle from being knocked over in the middle of the night. 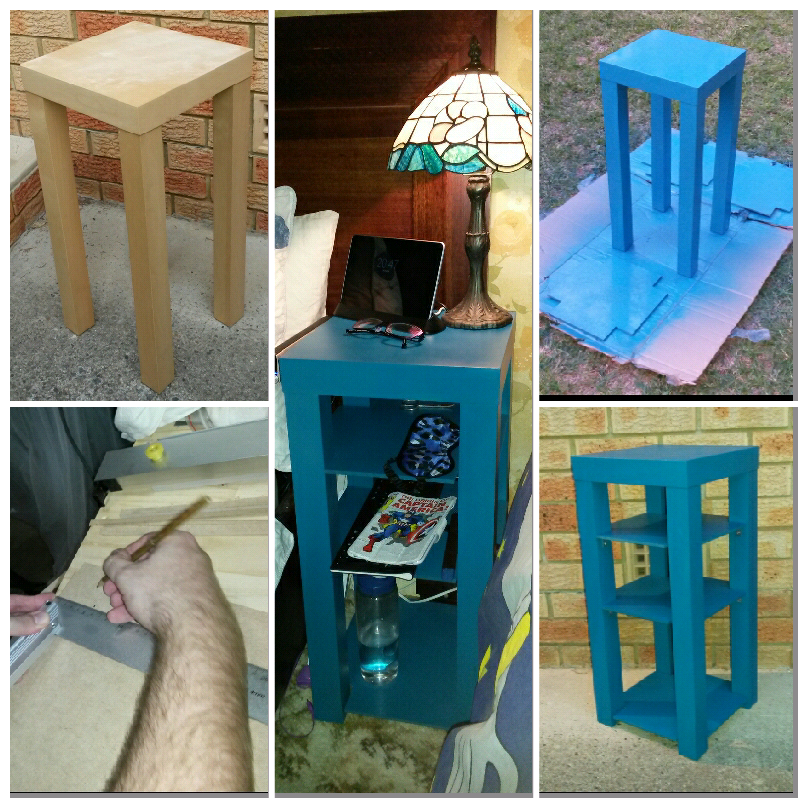 The colour turned out far better than I thought it would.  I think it’s a great solution, possibly a better one for me than drawers.  What is even better, is that the whole project cost under $30, allowing for the fact that the table was not being used, and the clear lacquer was already around for other projects.  Repurpose WIN!