Spats are turning up everywhere.  From barely there chains or straps, to full military style button downs and every thing in between. Originally popular in the late 19th and early 20th century, they have been used for many reasons, protection, uniform and fashion.

For the last couple of months, I’ve been Googling images of different types of spats, looking for patterns, and how-to tutorials.  I don’t know why I have the sudden feeling of needing to own a pair (or eight), but I really think they’d look spiffy over my new boots, and would help me dress them up a bit on occasion.

If you’re unsure as to what they are, or are for here is the wikipedia entry on Spats and Gaiters.

As tall boots are pretty much an impossible item for me to purchase, spats give me the freedom of creating a cover for my ankle boots that will make the appearance of taller boots.  This can be handy in winter, as they can be lined with flannel or a light fleece to act as a ‘leg warmer’. 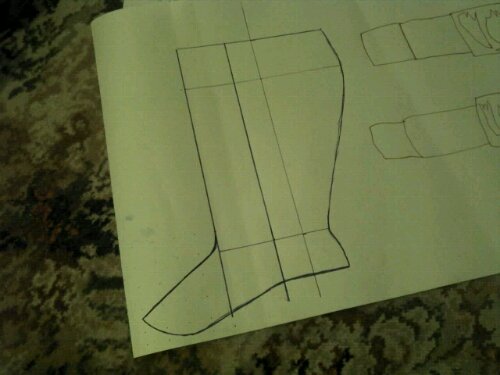 So I started drafting a pattern the other night.  Be not fooled!  Drafting a fitted pattern for the calf is NOT easy!  I have a small ankle and a large high calf.  I can only presume that the shape is due to my dance history, as the rest of my family have more elongated, gradual calf muscles.  The draft seen here, was the first, and it did NOT fit.  Even with a re-measure, re-draft and much tweaking, the second did not sit right even though it fit.  The difference between the calf muscle and just under it is just too large.  So I’m going to have a third attempt and just make them to come up to my calf, rather than try to fit over it.

I’m really excited about being able to accessorise my feet without having to buy more shoes!