I really enjoy reading and when I get the time (which is rare these days), nothing quite beats curling up on the couch with a good book.  So why would I want an e-reader?

Storage space is becoming increasingly difficult around these parts, with a growing boy, and two adults who each have hobbies that take up quite a lot of space (let’s hope the Boy enjoys either Music or some kind of Fibre/Fabric crafts when he gets bigger!), books actually take up quite a bit of prime realty.  While I have my favourites, probably 2 or 3 dozen books that I would want to keep in paperback form such as my Harry Potter set, I think I would rather have them stored digitally and then be able to carry around half a dozen or so to read snippets from (and subsequently bookmark) when I get an opportunity, without having to lug around the actual books.  It would also be exceedingly handy to be able to carry around a knitting pattern or two, for both actual knitting, and yarn buying on the go.

The market has recently been flooded with a wide array of e-readers, from the sleek iPad, to the utilitarian Kobo.  Each (and most in between) have features that you don’t like, and features that you wish you had.  Although I’ve not got one myself (yet), I know what I’m looking for, and with the announcement of each incarnation, I can pretty much immediately tick as a maybe or an “uhh.. no”.

Between my husband and I, we have narrowed it down to two ASUS models. 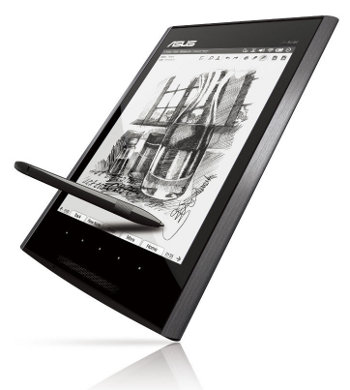 Soley upon spec reading, The Husband had pretty much narrowed it down to the Eee-Tablet/Eee-Note device from ASUS.  It seems like the perfect cross between a strict e-reader, and the iPad.  The features that stand out are:-

The features I don’t like (but they don’t seem to bother The Husband) are:-

I want an e-reader, but the 6″ screens leave me a little cold.

I would like to use it for knitting patterns, most of what I do is lace, so there are charts, and they’re TINY on the 6″ screen.  So my sights turned to the elegantly simple DR-950.

There’s been no indication of pricepoint, however.

Unfortunately this is the part of the post where I get a bit ranty.  The Eee-Tablet/Eee-Note unit was supposed to have a “global” release this month, this has been updated to November.  No major issues, right?  Well, apparantly “global” really means “Northern Hemisphere”, as there is no official release date for Australia, or whether it will be released here AT ALL!  What the…? What’s up with that, ASUS?

In the mean time, there are plenty of other e-readers and computers out there.

Speaking of other e-readers, Kobo has announced a new reader, which includes Wi-Fi and 16 level greyscale (which is double the original one).  Sure it is a strict reader and only 6″ screen, but it has a firm US release date of 1 November.  I have spoken to Borders, and whilst they don’t have a firm Australian date, they are trying to avoid the problems they had with the original devices release.  Being that each store got about 10 units 2 weeks after the US release, which were gone in a week, and then they weren’t able to get any more for 2 months.  This time, they said they will probably wait a little longer, but have more stock (and more frequent incoming shipping) from the get go.

Why don’t I just get a Kindle?  Bascially I’m not impressed with the propriety DRM, the fact it doesn’t handle PDF without some external assistance and it’s completely tied into Amazon.

So until I get a call, email or other form of notificiation, it seems I’m on a wait and see.

Are you waiting for a release date of these devices, or similar ones?  What are your thoughts on “global” releases?