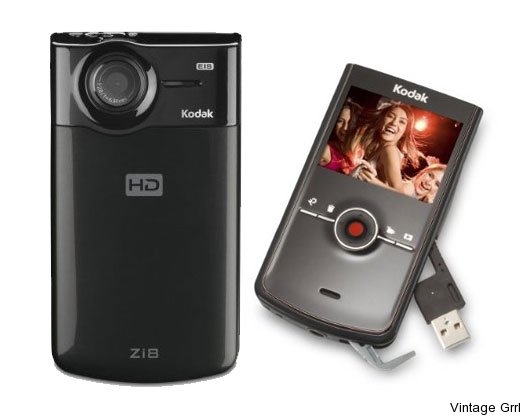 Earlier this year I was in the market for a compact digital video camera.  We have a ‘compact’ Sony handycam, which is a great camera, but it’s a bit cumbersome to pop into my handbag or tote.  So off I went looking for something smaller.  Fortuitously, SuperKawaiiMama had recently received a Kodak Zi8 for review and had praised it highly, not only for it’s output, but it’s sleekness.

I had seen the Kodak Zx1 in action, and liked the interface, but I really liked the cosmetic look of the Zi8, and the fact it had specific macro/landscape functions.

The only problem with Kodak products, is they’re not easy to buy except directly from Kodak stores.  Luckily I was able to talk to my local Harvey Norman to have them order it in for me.  It took about 2 weeks to order in, and being sight unseen, it’s not the ideal way to purchase a tech-product, but I knew it would be the right camera for me.  Now that the market has more of these mini-video cameras to deal with, I’ve seen the Zi8 in retail stores so you can touch and feel.

In the box you have:-

Specs on the camera from the Kodak website are:-

All very nice, but how is it to use?

The construction is nice and solid.  It has a good weight to hold, but not heavy so that you’ll fatigue your arm taking video.  It’s about the same size, but a bit thicker than an iPhone.  The glossy finish will, however, attract finger prints like nobody’s business!

I find the camera interface very simple and user friendly.  The screen is crystal clear, and I think the colour capture is pretty accurate.

The widescreen photos are nifty, but would have to be cropped to print at standard photo ratios.  Above photo was taken at Acer Arena at Homebush, during the warm up for the recent Tim McGraw concert. We were sitting at Corporate Box Level. As you can see, even in low light, the photo is not too bad, it’s grainy (and I would expect the video at this light level to be similar),  but it’s only 5MP as a still shot.  Photo below was taken at Cockington Green in Canberra. (Click photos for full resolution photos – warning: Large file size)

This video was filmed at 720p @ 30fps. Camera is not on a tripod.  The internal microphone is monoaural only.

Now, for other features.

The built in USB connectivity is great.  The USB plug in the side of the camera means that you don’t need to take an extra USB cable with you everywhere, just plug it in to your computer and the camera appears as a storage device so you can access the content on it’s internal memory and the SDHC card. You can’t, however, have the USB plugged in and film at the same time, so it can’t be used as a webcam. This is something I’d like to see Kodak change in the future.   Also, if you have an in-car USB charger, then it’s easy to charge on the go!  It also has a mini HDMI output, so you can view directly on your HDMI capable TV/Monitor, regular AV out and support of an external stereo microphone (which most of the other compact HD cameras of this type do NOT have).

There is a removeable, rechargeable Kodak Li-ion battery (can charge in camera via USB or DC).  I would suggest that if you plan on doing more than 60-90 minutes of 720p/30fps recording, I’d invest in a spare or two.

Now to talk about memory, SDHC cards are a must if you want to shoot High Definition videos, but make sure you get the “Class 6”, it all relates to write speed, and while normal SD cards don’t have minimum write speeds, SDHC do.  The Class 6 will start writing faster than the Class 4 (6Mbit/s vs 4Mbit/s).  The Zi8 supports up to 32Gb SDHC.  Some of your older memory cards may have problems recording video in the higher settings.

In my attempts to play back video recorded at 60fps on my Windows Vista computer, the video playback was  “jerky”.  I didn’t have any problems with video recorded at 30fps.  After some research this may be related to my computers graphics card.  Be sure to test video play back on your computer before you go out and record that important memory.  Macs don’t seem to have this issue.

The Zi8 has no optical zoom, so you’re not wanting to try and film something too far away.  This camera isn’t one to be used at major sporting events, but weekend sports and sports carnivals where you can get close to the action is a big YES.  It’s more of a personal camera or one you can use to capture memories.  In saying that, the zoom is quite able to capture the memories and atmosphere from the events you want to remember, although the zoom is not smooth for ‘while filming’, and you may be better off to zoom before you film (or remove the zoom in the editing software after).

As far as interface goes, it’s very intuitive, and very easy to switch between modes.  You just need to remember to change from “Normal” to “Macro” (switch on the top of the unit) if you plan on focusing on anything closer than 1m (3ish ft).  Also if you switch between the two DURING filming, you will hear a click sound on your audio.  There is also a red LED recording light on the front of the camera, which cannot be turned off.  So no sneaky recording for you!

It comes in three colours, Raspberry, Blue and Black.  I went for black as the Husband thought the red was too pink.

I was less than thrilled with the included editing software.  It’s very basic and not quite as intuitive as the camera, but perfect for “OMG look what XY did” and stick it on YouTube.  If you’re wanting a proper production for tutorials, or other things then you’ll need 3rd party video editing software.

All in all, I enjoy using this HD video camera for those ‘on the go’ times and filming tutorials with.  I think the larger HD handycams are more stable, and probably better for those times when you’re purposefully going out to film stuff (like family reunions, or trips to the zoo etc).  But this camera is great for blogging, You Tube (and similar), “happy snap” videos with family & kids and things like that.  And at sub $250, it’s price equivalent to other cameras with the same type of specifications, but I do think it’s a lot nicer looking and has a very comfortable to hold feeling.

Overall I like the camera for what it is.  A pocket-cam that does HD and macro.  Would I buy it again?  Yes.

NB: This camera was purchased by myself, and this is not a paid review.