Where do I start?

Mid last week on Twitter, Dita Von Teese announced that during her visit to Sydney she would be releasing tickets to a free show “info to follow”. Well, for the next 24 hours I was constantly checking for the information. My persistent vigilance paid off, however. I managed to jump on the registration for tickets within the first 5 minutes of it opening up. Then there was 24 hours of frantically checking emails. Once I found out I had tickets, I will admit to bouncing around the lounge room squealing like a little girl in excitement.

I took my friend, Sharon, with me for a fun Vintage night out. We started with a glass of bubbles at the Intermezzo Restaurant bar upstairs before heading down to the Crystal Bar.

The night was amazing.  Walking in we were greeted with a “Cointreau Blush” cocktail and an assortment of canapes whilst surrounded with velveteen curtains and images of Dita, both still and moving all around us.  It was interesting to see all the different types of people who came.  There were other vintage girls, a couple of burlesque types but mostly “normal” (and I use the term in contrast of being vintage etc) people.  But interestingly the audience was predominately female.

After a time, we were ushered in to the performance room, with crystal lights and more cocktails, the “Cointreau-Teese“.  Now, I’ve never been a huge fan of Cointreau.  My mother loves it, but usually drinks it over ice.  I always found it to be a bit odd tasting.  But these cocktails were AMAZING!  The Blush was tart with grapefruit juice… and pink, and the Teese has Monin Violet Syrup which makes it very sweet… and purple!

Cocktails aside, there was a real sense of anticipation as we stood waiting for the moment where the lights would dim, and Dita would appear.

You can Google the Dita “Cointreauversial” performance and probably find it on Google, but there is NOTHING like seeing her live.  She is a tiny thing, but she has so much presence that you simply can’t take your eyes off her.  She is breathtaking.  There are no other words I can think of that come even remotely close to describing her. 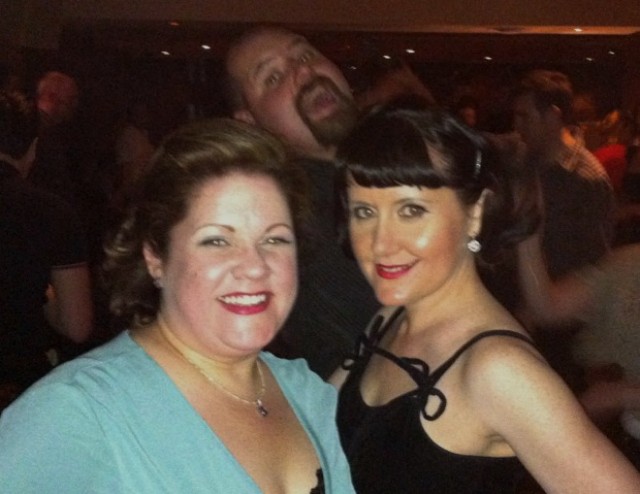 After the high of Dita, the only thing to do was to go dancing!  Fortuitously, the same night saw host to the event “Jump, Jive & Wail”, which is on at The Hotel Chambers on Elizabeth St (Martin Place), 3rd Friday night of every month.  I don’t get to go out dancing as much as I used to, and let’s face it.. I’m out of shape, but I had such a blast seeing old friends that I haven’t seen for YEARS!  (The goofball who photo bombed us is Rockabilly Rod .. LOL).  I think I wrapped up my night around 11:30, I was beat, but on a high from having such a great ‘girls night out’ with Sharon.  She’s such a good egg.. 😀

I think after getting home, and winding down, sleep started well after 1:30am.  Which usually wouldn’t have been so bad, if not for the fact I needed to get up and get gorgeous for a wonderful breakfast meeting with the lovely Super Kawaii Mama (aka Candice DeVille).  Unfortunately there are no photos of the two of us on the Saturday morning, we were having far too much fun chatting!!  We had breakfast at the Old Vienna Coffee House in the QVB, and then on to the Tea Centre in the Glasshouse for a spot of morning tea.  Then off to meet up with my hubby and son, for a walk to Circular Quay before Candice needed to head off for other meetings and catching up with friends.  I had such a lovely morning, it was well worth the lack of sleep!!

That afternoon we headed to my Mother’s house for her birthday.  It was filled with family and fun, and really good food. 😀  So much so that by the time we got home, I was pretty much asleep.  Sad to say that this was not much past 8pm!

Thankfully Sunday morning was a bit less rushed, and whilst I felt much more rested, I found myself sore all over from my dancing exploits on Friday night.  Still, I got myself up and ready for the Rock’n’Roll & Alternative Markets at Tempe.  I was very restrained, and just picked up a few shiny things.

I found these cute posted earrings, none are larger than a 5c piece, and all are enamelled metal.  The fans at the top, whilst gold based are red.  So I figure they’d get a fair bit of wear.  The bows were just too darling to leave and the hooked blue birds remind me of a necklace I had as a child that was stolen.

This red rose was found at the Bexterity stand.  It’s actually darker than the photo, but it’s a lovely flocked blue-red rose.  Something I’ve been looking for for quite some time.  It’s a nice size, too, at around a handful, that is large enough to be seen, but not so big that it will cover half my head. 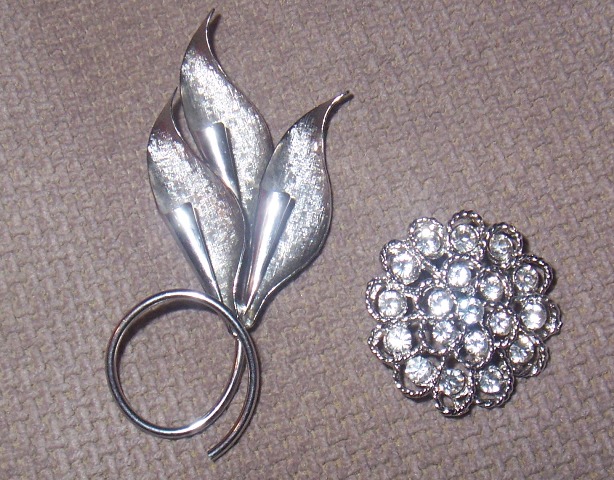 One thing that I’ve noticed in my search for nice vintage accessories, is that silver vintage brooches are really hard to find, especially ones that aren’t over the top and full of bling.  This was my lucky day, though.  The one on the left is just so pretty, almost like rolled leaves, perfect for daytime wear.  The round bling on the right was just too cute, in really good condition, not too large (at about the size of a 20c piece) that I had to have it, as while it’s sparkly, it’s still fairly understated. 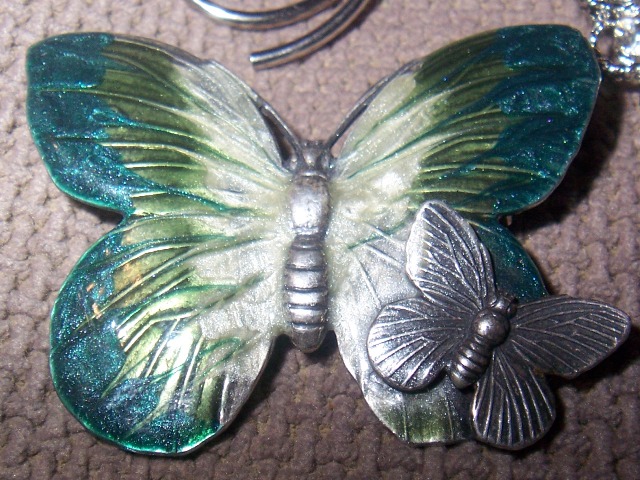 This enamelled butterfly was my prize find, though.  It’s about 2″ wide and just so different, AND silver!  Apparantly it had been passed over at a market in Canberra, because the buyer thought $20 was too much… obviously it was just meant to be mine. 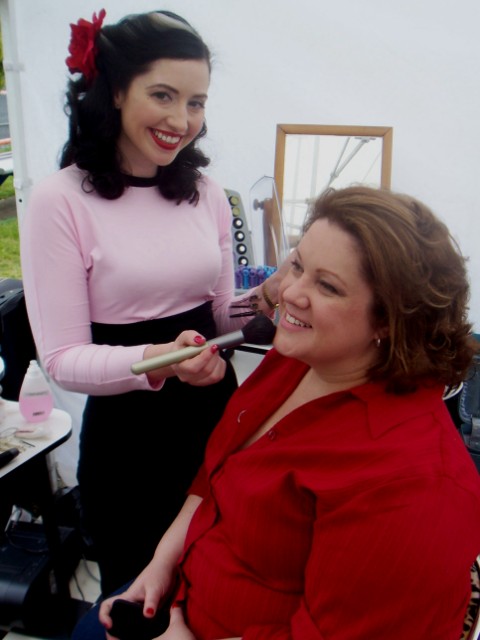 I did take advantage of a fabulous deal at the Bexterity stand, and had my hair and makeup done for $25 by Candice.  Seriously, how often would I get the opportunity?  So I sat and got glammed!

Now silly me didn’t take photos of the finished product until well after (about 6 hours after), so didn’t get the ‘do in its prime, but it does go to show the sheer staying power it had. I did learn some really handy things for doing my hair and makeup in the future, though. 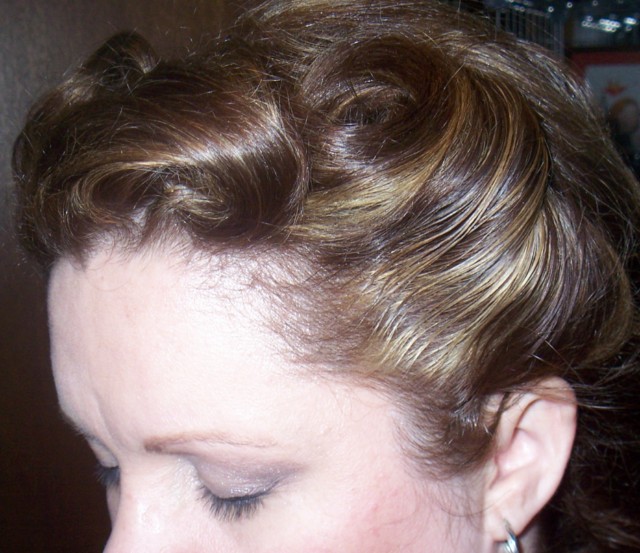 Candice was surprised that my hair wasn’t as thick as it appeared, so it goes to show my setting style does what it’s supposed to (yay!).  We went for a 1940’s Rolls look for the hair, and just a very wearable 1940’s makeup. 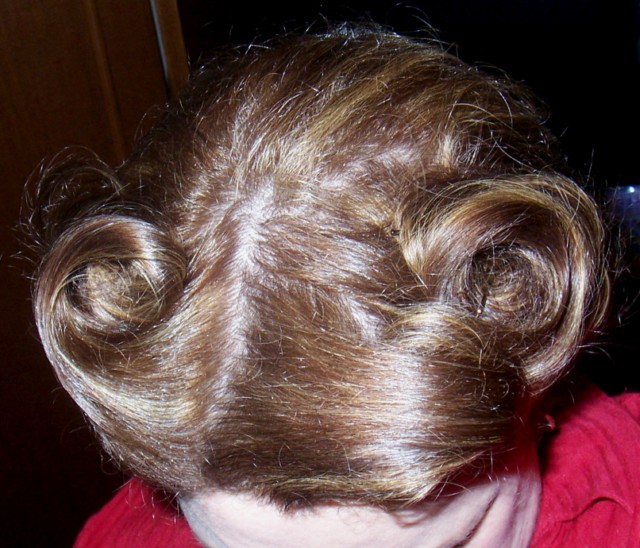 There was very little hairspray used on my hair, and I learned that using a tiny amount of Brylcreem during styling is a much better way of dealing with wisps & flyaways than hair spray.  This was an absolute revelation for me, as I’ve beeing trying to use a normal waxy pomade, which has just been too darn heavy for my hair, and doing more harm than good.  So I’m REALLY excited about trying this out at my next styling session. 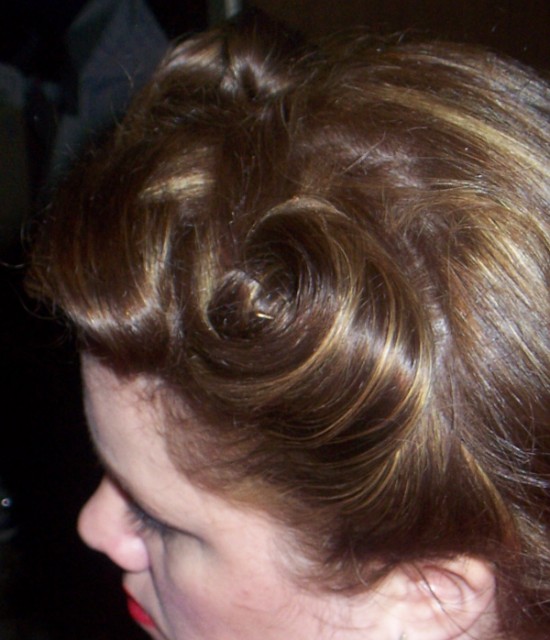 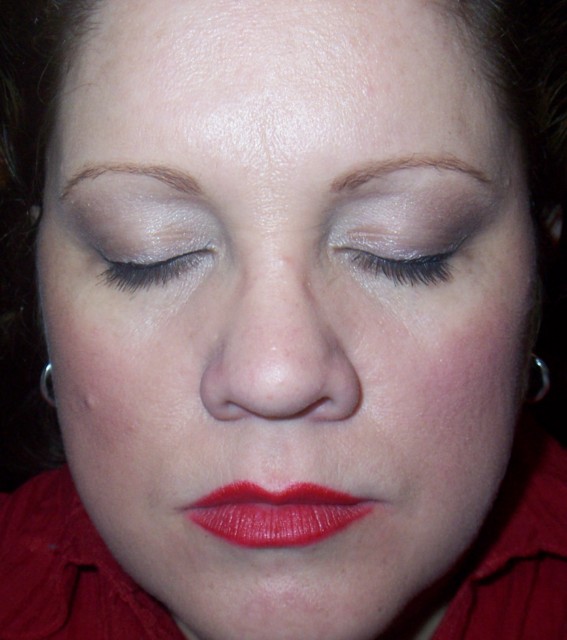 The makeup was lovely too, nice and soft, which is how I usually go for daytime, but Candice told me that the easiest way to ruin your lip lines is to smoosh your lippie.  So now I’m going to have to retrain myself not to smoosh… this is going to be hard…..

All in all it was a simply brilliant weekend.  The weekends that are filled with vintage fun are few and far between, but when they happen, they are just so much fun!

I do have to thank my husband and son, though.  They were very understanding and VERY supportive of my having this time (even though my husband got his photo on the Inner West Courier website).  I can’t do what I do without their help.