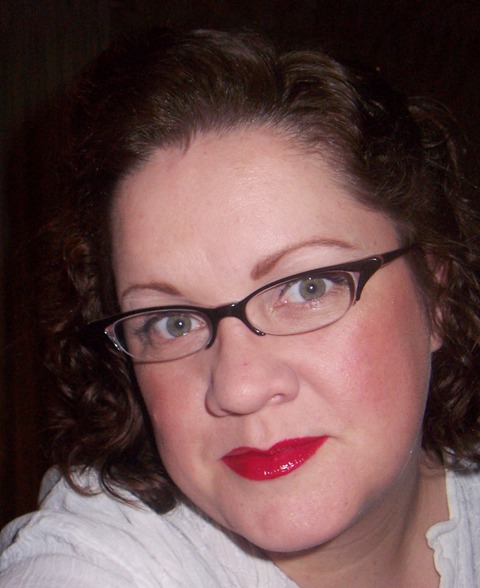 There are some terriffic tutorials online for makeup that’s really striking and bold, quite often involving false lashes as well.

But I wear glasses, so a lot of these looks are lost behind the frames.  Also, in a lot of cases, false lashes are far too long to wear behind specs.  So what do you do?

Well, a bit will have to do with what type of frames you have.  Rimless glasses will give you the most makeup freedom, where heavier frames will restrict you a little more.

I tend to steer away from the brightly coloured contrast looks, as awesome as they look, they just don’t work with glasses.  My specs are pretty stylised, being a modern version of a catseye.  So I tend to stick with a winged eyeliner, black lashes and either a contour or smokey eye.  I don’t find this restricting at all, as there is lots of fun to be had with these types of looks, and it certainly doesn’t mean that you can’t have fun with colour.

My basic look is a soft contour shade and the winged liner.  Colours will vary pending what I’m wearing.  But I’ve found a great ‘neutrals’ palette that works for me.  I can’t wear brown eyeshadows (they turn orange on me), so I had to hunt for something in either greys or purples.  I think greys/blacks are far more dressy than to be used for ‘every day’, so the purples were the winner!  The Covergirl Berries & Cream palette I got back in February has been fantastic.  They’re a soft colour, and while some people like really pigmented shadows, there are times when I prefer something that’s just way more subtle.  As long as I have primed properly, I get a good days wear out of the Covergirl.

I’ve seen a lot of tutorials on how to do a winged eyeliner on YouTube, and they’re all great, and all a little bit different.  It is a practice thing, of course, so the more you do it, the quicker you’ll get at it.  My biggest tip is to find  type of liquid/gel/cake liner that you’re comfortable with.  I have a cake liner from BeneFit Cosmetics, “Babe Cake”, that I’ve had for a while, and I’ve gotten used to it.   I can throw on a pair of basic wings in about 2 minutes.  I’ve also used pigments with water, which opens up a huge range of colours.  You can also try a good eyeshadow mixed with some water (I’ve had various rates of success with this).  I’d like to try gel liner, though.  The finish on it looks really good.  As for brushes…. well, you can pay well over $30 for an eyeliner brush and in all honesty, I’ve not found a “makeup brush” one that I’m happy with.  The best brush I’ve had so far is a $3 craft brush.  It’s super fine, slightly longer bristles and doesn’t get all frayed after a few uses.

Left is the ‘day’ and right is the ‘night’.  The only difference between the two is the use of the deepest purple on the outside and a slightly longer wing on the eyeliner.  The day makeup is what I’m wearing in the top photo.

I’m just starting to get into false lashes, because I have found it fiddly and tricky and have not been able to ‘get’ it.  Also, wearing glasses means that it’s harder to find ones that give you the look without them brushing up against the lens every time you blink.  I am finding, however, that demi lashes tend to be most appropriate, or the ‘natural look’ false lashes, that are more about a gentle look than the full on glam ones.  Do I wear them every day?  Heck no!  I rely mostly on a good mascara.  There are a lot of new ones out at the moment, boasting fuller, longer lashes (as they always have), but I’m yet to find one that I’m 100% happy with.  So the search continues!

So wearing glasses doesn’t meant that you can’t have a good time with makeup.  It just means that you need to find what works for you and your spec frames.

One thought on “But I Wear Glasses!”